The text ‘GRANDS-DUCS DE LUXEMBOURG’ and the year-date ‘2012’, flanked by the mintmark and the initials of the Mintmaster, appear above the effigies on the inner part of the coin.

In front of the effigies, the outline of the city of Luxembourg appears as background.

The names ‘HENRI’ and ‘GUILLAUME IV’ as well as the text ‘† 1912’ are depicted below their respective effigies.

Other coins from Luxembourg 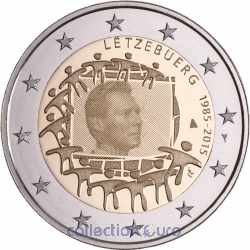