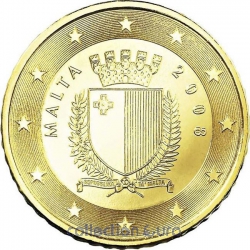 The centre of the coin depicts the emblem of Malta.

The name of the country ‘MALTA’ and the year mark ‘2008’ are engraved in an interrupted semicircle on the upper left- and right- hand sides of the emblem respectively.

The image and the inscription are surrounded by a ring of concentric circles on which appear the twelve stars of the European flag.

Other coins from Malta