This coin is the first in a series of seven coins depicting Maltese prehistoric sites. The Ggantija Temples are two prehistoric temples on Gozo, the second-largest island in Malta.

One of them is the oldest stone structure in the world, predating Stonehenge and the Great Pyramids by hundreds of years. Round in shape and containing statues of full-figured goddesses, the Ggantija temples were dedicated to the Great Earth Mother and probably included an oracle.

The site was a place of pilgrimage for the ancient inhabitants of Malta.

The two temples of Gjantija are estimated to be 5,800 years old (built between 3600 and 3000 BC). According to an ancient legend, the temple walls were built in one day and one night by a female giant named Sunsuna, who did it while nursing a baby.

Ggantija is Maltese for "giant's grotto." Ggjantija seems to have been a place to pray for healing. Together with other similar structures, these have been designated a UNESCO World Heritage Site, the Megalithic Temples of Malta.

Other coins from Malta 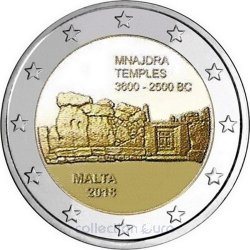 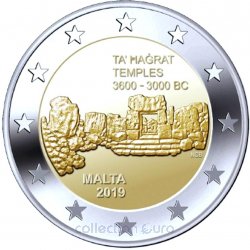